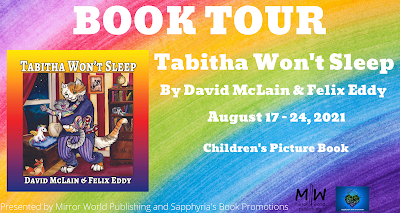 About Tabitha Won’t Sleep:
It’s eight bells, and Tabitha Winter doesn’t want to go to sleep.
“Well, it’s time to go to bed,” Mama Kitty says. “Come on, let’s put your pajamas on. Dad will read you a story.”
Tabitha Won’t Sleep is a beautifully illustrated picture book about a young kitten whose parents encourage her to believe that she can do anything she wants to, as long as she goes to sleep first. Children will love exploring the wonderful adventures Tabitha has in mind as she tries to avoid bedtime, and adults will love that in the end, everyone goes to sleep. Seriously, it’s past eight-thirty. Lay down your head and close your eyes.
Purchase Links:
Mirror World Publishing:
Follow the Tour for Guest Posts, Spotlights, and Reviews:

Writing a Children’s Book: The Illustrator is the One with the Talent

Every so often, especially if I’m
sitting in a hotel room somewhere, I will turn on a morning talk show, and they
will talk to some actor or actress who tells a self-deprecating story, and then
casually mentions that they have a new children’s book that has just been
published. The host will usually get a little more excited about this than they
should, and then hold the book up, as if two middle-aged people reading a
bedtime story together is the sort of thing that people do every day. There are
usually a lot of warm smiles all around, and if you pay attention to these
things, you’ll see that the book will usually end up on the list of
best-selling children’s books for a week or two.

This is a con job.

I have written a children’s book. It’s
a wonderful book, and I’m very proud of it. I wrote it for my daughter, who at
this point has had it read to her literally hundreds of times.  That being said, I can tell you that
interviewing a children’s book author about their new picture book is roughly
the equivalent of getting the reunited Beatles on your television show and
asking Ringo all the questions. You see, I wrote the first draft of Tabitha
Won’t Sleep in roughly two hours while watching the movie Hello Dolly!
My wife, who did the pictures, worked on it off and on for three years.

After I finished, and after Barbara
Streisand had ended up married to Walter Mathau, I emailed the text to my wife.
She and my daughter had gone out of town for the weekend, and I was left
behind. My daughter was three months old, and impossibly small. She had been
born almost two months premature and had spent the first six weeks of her life
in an incubator, with tubes coming out of her in multiple places. Once the
tubes come out, the hospital staff made sure we knew how to change a diaper,
and then they handed us a child the size of a Guinea Pig and wished us the best
of luck. My wife wasn’t OK. Neither was I. Nonetheless we came home with
Tabitha and started a new chapter in our lives.

So, while my wife was out of town,
I wrote a story. A nice story about putting Tabitha to bed, a story where we
showed Tabitha that she could do anything that she wants in life, provided that
she goes to sleep first. I anticipated (correctly) that my daughter would look
at bedtime as the end of the world, and might need to know that there would be
a wonderful new day full of adventures tomorrow. In the book, Tabitha would be
about three years old, and would be a cat. (My wife and my daughter both
believe that the cat version of anything is better than the regular version of
the same thing.)

I got a response to my email about
three hours later. “Your story made me cry” my wife said. After that, she got
to work.

The drawings started coming
quickly. This part is fun to watch. Most writers will probably never get to see
their work come to life quite like that, and my wife, inspired by the idea that
our daughter would get to read this, did some great sketches with a lot of life
in them. After that, she went to ink the drawings. Here we had a small
disaster, as one of our real cats knocked over a bottle of ink onto a picture.
(Our daughter ended up using it as a coloring page.) After that she started
working on coloring. I could see that the book was going to be beautiful. Our
book has a lot of fun settings that made for good imagery, like Egyptian
Pyramids, and the moon. (It also features a lot of pictures of my daughter’s
actual bedroom, which has a steampunk theme and is painted in red and yellow
stripes and made a bit of a splash on the internet before she was born.) Weeks,
and then months and then years rolled by. I made matters worse by adding a
couple of pages to fill out the book. There were lots of times that I thought
she would never be done, which was frustrating, because we were so close.
Tabitha learned to walk and got out of diapers. Then one day she was done. I
brought my daughter downstairs to my computer and read the book to her.

I learned a few things from the
social experiment of writing a book about my daughter. For one thing, Tabitha
always understood that the book was about her, even though in the book she’s a
cat. For another, anything that was even slightly different about the way her
room was depicted in the book had to be fixed in the real world. This led to an
awkward conversation where my daughter suggested we buy the toy castle pictured
in the book, causing my wife to explain “That castle isn’t real, it’s just a
picture I drew.” To which my daughter replied, “It comes with a pony.”

Since then, we have read Tabitha
Won’t Sleep a lot. I have been in the unique position of reading my book to
the main character in the book while sitting in the room that book takes place in
and having the person that I am reading to fall asleep at the same time as she
does in the book. 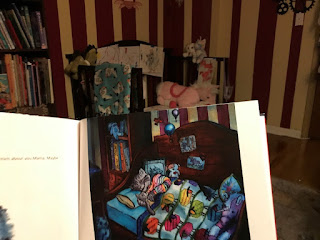 I can tell you I worked as hard as
Jamie Leigh Curtis worked on any of her children’s books, which is not very
hard at all. My wife, the lovely and talented Felix Eddy, did most of the work,
and she did an amazing job. I can tell you that I did have a wonderful
time working on the book. If you decide to write one, I hope you do too.

David McLain is
the author of Tabitha Won’t Sleep, a new children’s book, available from
MirrorWorld Publishing. It was illustrated by his wife, the lovely and talented
Felix Eddy. It can be purchased {Insert like that I don’t have because the book
is not actually out yet} here.  You can
follow him on twitter @mclaindave. 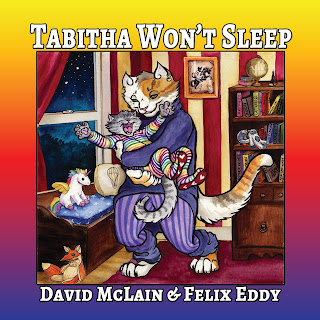 Release Date: August 17, 2021
Publisher: Mirror World Publishing
Meet the Author:
David McLain is the author of the novels The Life of Thief, Dragonbait, and The Time Travellers Resort and Museum. His stories and poems have appeared in over two dozen magazines, including Harvard’s Dudley Review. He is an occasional contributor to the podcasts The History of England, and Geek Salad. He graduated from Purchase College, where he directed a production of William Shakespeare’s The Tempest. He lives in upstate New York.
Meet the Illustrator:
Felix Eddy graduated Magna Cum Laude from Alfred University. She has illustrated over two dozen books for children and young adults, including The Big Red Purse, Dinosaur Boogie, Barks Mulberry Socks*, K-9 Merlin-Police Dog Extraordinaire*, and The Bestiary Alphabet, which she also wrote. You can find out more about her art and embroidery at her website www.felixeddy.com. (* Bark’s Mulberry Socks and K-9 Merlyn are both 2020 TAZ award winners.)
Connect with the Author and Illustrator: 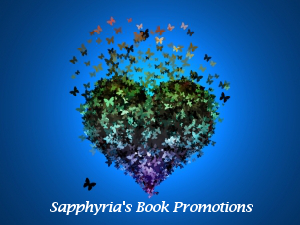