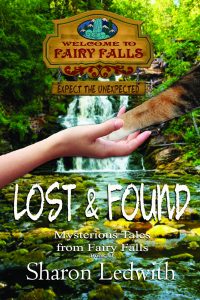 Fairy Falls was bores-ville from the get-go. Then the animals started talking…

The Fairy Falls Animal Shelter is in trouble. Money trouble. It’s up to an old calico cat named Whiskey—a shelter cat who has mastered the skill of observation—to find a new human pack leader so that their home will be saved. With the help of Nobel, the leader of the shelter dogs, the animals set out to use the ancient skill of telepathy to contact any human who bothers to listen to them. Unfortunately for fifteen-year-old Meagan Walsh, she hears them, loud and clear.

Forced to live with her Aunt Izzy in the safe and quiet town of Fairy Falls, Meagan is caught stealing and is sentenced to do community hours at the animal shelter where her aunt works. Realizing Meagan can hear her, Whiskey realizes that Meagan just might have the pack leader qualities necessary to save the animals. Avoiding Whiskey and the rest of shelter animals becomes impossible for Meagan, so she finally gives in and promises to help them. Meagan, along with her newfound friends, Reid Robertson and Natalie Knight, discover that someone in Fairy Falls is not only out to destroy the shelter, but the animals as well. Can Meagan convince her aunt and co-workers that the animals are in danger? If she fails, then all the animals’ voices will be silenced forever.

Beep, beep, the front door sounded again. Sighing, Whiskey lifted a back leg in the middle of the hallway and proceeded to groom herself. She heard a familiar voice. The Kind One is here. Good. I’ll get my litter box done first. She stopped grooming and instantly regretted the extra mess she’d made. Then Whiskey heard another voice. This one belonged to a human who was younger and female, yet there was a rough edge to her voice, like she had just swallowed a handful of litter. Curious, Whiskey sauntered over to the reception area, jumped on the grey chair that waited there for her, and proceeded to do what she did best—observe.

“Stop whining about it, Meagan, or suck it up, as you would say. You’re doing these hours and there’s no getting out of it.”

“Isn’t there a child labour law on this?” the younger human asked.

“You’re not being paid.”

“Okay, isn’t this considered some kind of abuse, then?”

The Kind One smiled. “Only if I feed you to Mary Jane.”

Whiskey snorted in laughter, but to a human, it would sound more like a strangled meow. The Kind One jumped and turned around. She giggled, and then moved to scratch Whiskey under the chin. “Good morning, Whiskey-girl. I hope you didn’t leave too much of a mess for me this morning.”

The girl’s face twitched. “That cat is named after booze? Nice.”

“She was found near the liquor store,” the Kind One said, smiling. “It seemed appropriate.”

Whiskey sneezed, causing her collar bells to jingle, and purred to appease the Kind One. She was Whiskey’s favourite human and she didn’t like it when the felines of the shelter made more of a mess than usual for her to clean up. However, last night, a full moon had graced the skies. Tempers were higher at this time of the month, so it wasn’t unusual to find upturned litter boxes, vomit in the cages, or clumps of fur all over the floor. The pull and power the moon had over animals was out of their control, so when it waned, things got calmer, and their home was kept cleaner.

“Mary Jane is our pit bull,” the Kind One was saying. “She’s the last one left in the shelter since the government banned the breed. I wish we could find her a suitable home. I think she’s going a bit bonkers being in the shelter twenty-four seven.”

The Kind One shrugged. “Fine. There are over seventy cats that need attention and care. I’m sure you won’t be bored.”

“Oh, haven’t you heard, my dear? There are pills for that,” the Kind One said, laughing. “Go into my car’s glove compartment and grab a couple of allergy pills, and then get your lily-white butt back here so you can help me start cleaning.”

The girl moaned. She pulled at the oversized pink scrub top she wore as if protesting the Kind One’s orders, and then opened the door to go outside. Beep, beep.

“Well, Whiskey, shall we get this party started?”

Whiskey meowed, and then stretched before getting down off the chair. She ran straight to the door and let out a long-winded meow. She wanted out so she could roll on the driveway to loosen any fur the Loud One had not purged from her. Two beeps accompanied her departure. Whiskey heard a car door slam and looked across the lot. The young girl had a white stick stuck in her mouth and was heading for the side of the building, near to the dog runs. Whiskey watched as she snuck behind the lone shed and sat down.

Interesting, she thought. I wonder if the Kind One trusts her?

Whiskey decided to observe this young human. Carefully, she skulked over to the tall grass that was never cut and pushed her way through it. Closer, closer, closer she got, until she was about a stone’s throw away. The dogs were barking like the lunatics they were. Louis was in the run closest to the forest that backed onto the building, while a new dog, a Lab mix, she guessed, was in the middle. The run next to the driveway had always been reserved for Mary Jane. Whiskey glanced back at the girl who was sucking on her white glowing stick. Whiskey sniffed, and then sneezed. Her bells tinkled. Poison, she thought, pawing her face to dissipate the stench.

“Who’s that?” the girl asked, quickly removing the white stick from her mouth.

Whiskey sneezed again, sounding off her bells as she jumped out of the long grass. She gave the young human a long look of disdain, like one a cat might make while having the squirts in a litter box.

“Oh, it’s just you,” the girl mumbled, and then resumed sucking on her white glowing stick.

Silly, stupid human, Whiskey thought. She turned to saunter away.

“I’m not silly, and I’m certainly not stupid,” the girl responded nastily.

Whiskey froze and then sat down. She turned her head around to watch the girl blow smoke out of her mouth. Her long legs were stretched out in front of her and she seemed relatively relaxed. Whiskey shook her head. Had she imagined it? Did this girl really pick up her thoughts? This was a real conundrum. No human had ever come as close as this one to understanding her; to actually communicating with her. The exception, of course, had been the Kind One’s instinct to know when a cat was ill and take care of the matter, but instinct was instinct and this was something more.

“What’s the matter, Whiskey?” the girl asked, sucking on the white stick once more before rubbing it into the ground. She blew out ringlets of smoke. “Cat got your tongue?”