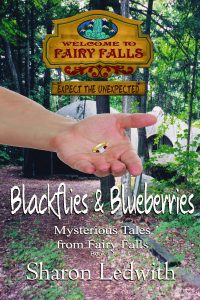 Diana MacGregor lives in Fairy Falls. Her mother was a victim of a senseless murder. Only Diana’s unanswered questions and her grief keeps her going, until Hart finds her mother’s lost ring and becomes a witness to her murder.

Through Hart’s psychic power, Diana gains hope for justice. Their investigation leads them into the corrupt world threatening Fairy Falls. To secure the town’s future, Hart and Diana must join forces to uncover the shocking truth, or they risk losing the true essence of Fairy Falls forever.

For over a year now, Diana had wondered, prayed, and longed for any information regarding her mother’s murder. And now this guy shows up, who claims he has these psychic powers that can communicate with objects. Objects like mom’s ring. Diana pressed her lips together. An object that had been there, at the scene of the crime, a viable witness to a heinous act. It all seemed so far-fetched, so out there. Yet what did Hart have to gain from all this? This wasn’t a fortune telling session, this was real. So was Hart for real?

“Who are you, anyway?” Brook asked. “The sorcerer’s apprentice?”

Diana snapped out of her self-induced trance. Gertie Ellis? Not the same Gertie Ellis who was Dan Boone’s only alibi? No. This is all too much. It was information overload to the power of ten. Diana thought she heard Donovan mumble ‘Uh-oh’ as he took a step back. He swung the golf club behind his back, as if anticipating her next move, but Donovan would have never have guessed what was about to happen next, because what came out of her mouth shocked even Diana. “Name your price, I’ll pay you whatever you ask. You can even have my car, if you want it.”

Hart snapped his head back. “Pay me? Pay me for what?”

“To find my mother’s killer,” Diana replied. “Let’s face facts. You’re the only person who has these special psychic connections and no one else has been able to solve her murder. Look, I’ve got all the information on my mother’s murder, I’ve kept impeccable files, know the suspects, and can help you get anything you’d need. What do you say?”

“Are you sure you want to do this?” Brook asked, concerned.

Diana held her hand out toward Hart. “Do we have a deal?”

Dumbfounded, Hart looked at Diana’s offered hand, then glanced back to her face, searching for a hint of sincerity. He nodded. “I’ll help you, if you help me.”

Startled, Diana arched her thin, fair brows. “Help you? How?”

Hart took a deep breath. “My mother was murdered too. In Toronto, just over a year ago, in our apartment. Nothing was taken. She had no enemies to speak of and we weren’t rich. All I have is a letter my great-aunt kept from when mom was my age. Maybe it will help answer some questions, maybe it won’t.”

Diana nodded. “So what does it say?”

Hart cast his eyes to the ground. His face reddened, his hands balled at his sides. He took another deep breath. “I…I don’t know,” he replied, his voice cracking. “I can’t—”

Diana inclined her head. “Can’t what?”

Hart’s eyes locked with Diana’s. His chin trembled as he whispered, “Read.”

Silence, except for the sudden, chilly gust of wind coming off of the lake.

Donovan broke it. “Dude, did you just that say you can’t—”

“Donovan!” Brook elbowed him in the ribs. “Don’t be so insensitive!”

Donovan rubbed his side, and nodded. “Dude, you’re illiterate?”

Brook rolled her eyes. “That’s not what I meant, you bonehead.”

Diana ignored her friends and got straight to the heart of the matter. “Then I’ll teach you to read. We’ll help each other. That way, I’ll get what I want, and you’ll get what you want.”