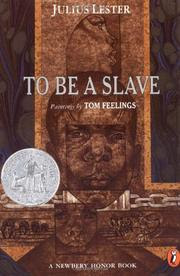 Today marks Martin
Luther King Jr. Day in the USA, which promotes equal rights for all
Americans, regardless of their backgrounds. So, I thought it would be
appropriate to honor this civil rights leader’s memory, and those who have
sacrificed and struggled before him, by sharing one of the most powerful books
I’ve recently read, with you. While researching for the next installment of The
Last Timekeepers series, entitled The
Last Timekeepers and the Noble Slave, I came upon this non-fiction gem, To Be A Slave. Released in 1968, To Be A Slave was actually written for middle
grade children, and has garnered many awards including a Newbery Honor. Authored
by Julius Lester and illustrated by Tom Feelings, the book explores what it was
like to be a slave. It includes many personal accounts of former slaves,
accompanied by Lester’s historical commentary, and Feelings’ powerful and muted
drawings.
I found that To Be a Slave fills a void in the
documentation of American history by providing a concrete illustration of the
culture and history of blacks in the United States. It contained a treasure
trove of research material I was able to glean for my book, and I’m humbled to
have received a glimpse into the lives of slaves through Lester’s thorough research.
The book focuses on the plight of blacks: their brutal capture in Africa, their
confined passage to America in slave ships, and their subsequent servitude.
Rather than offering a dry summary of these events, Lester brings history to life,
presenting the testimony of former slaves (including Solomon Northup of Twelve Years a Slave) who
describe their experiences in visceral detail. Because most slaves were
illiterate, their stories were passed along orally, but most written historical
accounts of slavery ignore this oral tradition, focusing instead on how slavery
as an institution affected the white, mainstream society. Hence, Lester fills a
historical gap by providing a black perspective on the same situation.
In my opinion, To Be A Slave (along with Anne Frank: The Diary of a Young Girl) should
be part of every school’s curriculum to educate our youth on what it’s
like to walk in the shoes of those who lived before them. It’s also like having
a time travel portal in the classroom. Of course, slavery still exists
throughout the world, but humanity’s view has changed in leaps and bounds since
the 1700s. We still have a long way to go, but we’re making headway and
removing those chains, one link at a time.
If you’re interested in
Julius Lester’s phenomenal book, To Be A
Slave, you can check it out HERE.
I’ll leave you with a taste of this classic book that forever pulled me into
Lester’s shoes:
“It
was the late forties. I was not yet ten years old. One day there came in the
mail a letter addressed to my father in which a company promised—in big and
bold letters—to research the Lester family tree and send us a copy of our
family coat of arms. I was excited, but when I saw my father fold the letter as
if to discard it, I asked anxiously, ‘Don’t you want to know our family
history?’
He laughed dryly. ‘I don’t
need to pay anybody to tell me about where we come from. Our family tree ends
in a bill of sale. Lester is the name of the family that owned us.’
His words were one of the
defining moments of my life.”