Now that all the blueberries have been harvested during August, Fantasy author Chris Pavesic has a yummy suggestion on what to do with those tasty blue treats. Take it away, Chris…

Enjoy this delicious and easy bread any time of the year. Fresh or frozen blueberries work great. Make extra, the bread freezes and thaws beautifully. 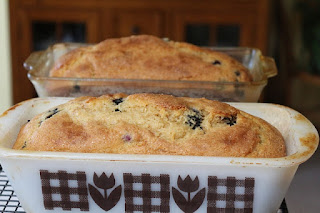 IN a medium bowl, stir together sugar, milk, oil, yogurt, egg, and extract. In a separate bowl, combine flour with baking powder. Add the dry ingredients to the wet ingredients and stir until combined.

IN a small bowl, toss blueberries with 1 tablespoon of flour.

POUR the batter into a greased 9 x 5 inch loaf pan. Bake 50 to 55 minutes or until a toothpick inserted into the center of the loaf comes out clean. Allow bread to cool for 10 minutes before turning onto a rack to cool completely.

COMBINE lemon juice and sugar in a small saucepan. Cook over medium heat until sugar is dissolved and then cook an additional 3 minutes. Let glaze cool a bit. Poke small holes in the top of cake and then pour glaze over the bread before removing it from the pan.

While your home fills with a tasty aroma, indulge yourself with a good book. May I suggest one of the books from my LitRPG series The Revelation Chronicles?

In Starter Zone Cami kept herself and her younger sister Alby alive in a post-apocalyptic world, facing starvation, violence, and death on a daily basis. Caught by the military and forcefully inscribed, Cami manages to scam the system and they enter the Realms, a Virtual Reality world, as privileged Players rather than slaves. They experience a world of safety, plenty, and magical adventure.

The gliders draw in their wings and dive toward the deck, covering the distance in a few heartbeats. Most of the arrows fly uselessly past the attack force and fall like black rain from the sky. The archers aimed and released the volley too late.

The forward catapult releases a torrent of small rocks at the lead glider. It is a scatter-shot approach that proves effective. There are so many missiles that it is impossible to dodge them all.