I met with a new proofreading client recently and looked at his manuscript. It needed a lot of work. In fact, he needed an editor not a proofreader. He had no idea what the difference was any more than he knew what an editor does. As I tried to explain it all to him, it took me back to my own beginnings as a newbie author and I remembered what a shock the editing process had been. I had no idea what was involved; writing the book turned out to have been the easy part! So, aspiring writers, here is a brief description of what lies in store for you.

Let’s assume that you were able to construct a fairly presentable manuscript and submit it to a publisher with strict adherence to their submission requirements and that said publisher has agreed to publish the work. Let’s also assume that you have thrown your hat in the air, danced on the table, bought a round of drinks for everyone in the pub, day dreamed about fame, fortune and winning the Booker Prize and now await the next step. Once the excitement has worn off, the real work begins. 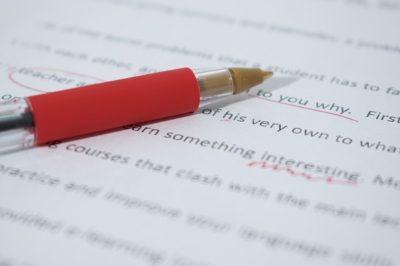 This is what happened to me: I was told who my editor was, that they were editing my manuscript and it would then be emailed to me so I could address the editor’s changes and suggestions. I had done a fair bit of proofreading by then but proofreading is to editing what a string quartet is to the London Symphony Orchestra. Straightaway, I was shocked when I saw that most of Chapter One had been removed (“You can condense it into a small paragraph somewhere if you really must.”) and great chunks of the narrative had been torn out. Thousands of words were scattered to the four winds, never to be seen again. Thousands! The book I had given years of my life to was purged and purified. And this is what you call a structural edit.

And guess what … I ended up with a much better book. Did I manage to condense the pruned pages into one small paragraph? You bet I did! It was the sort of exercise that tones up the writing muscle. I learnt how to write more succinctly and move the narrative along without unnecessary clutter. Editors I’ve had since have not been so ruthless, but it’s probably because I have become a more competent writer.

Once the structural editing is done, it’s time for line editing. This is exactly what it sounds like: going through the narrative line by line, addressing punctuation, spelling, typos, syntax and word choice. The editor will often suggest the author uses a better word or adds some description or makes the dialogue more natural. There will be all kinds of errors or inconsistencies in continuity. Have you used the same word three times in quick succession? Perhaps a character does something incongruous and you never noticed? Did you just mention someone, having forgotten you killed them two chapters ago?

You can imagine how long and involved a process this can be, particularly if you have a book as long as mine was. (‘Was’ being the operative word!) But your editor is trying to make your book the best it can be. You may have to lose your favourite metaphor, pluck out padding you enjoyed reading, delete swathes of dialogue that made you laugh but did nothing to further the plot or develop the characters. In the end it is all worth it.

Hopefully it is at this point that your publisher will give their blessing to the final edits of the manuscript.

But that’s not the end of the process, because it‘s then that a proofreader takes over and that proofreader is very often YOU. Having worked your way through your manuscript umpteen times already until you could happily throw it at the wall and walk away forever, it is up to you to read through ALL of it carefully and look for any errors that have been missed.

Yes, the editing of a manuscript is a lot of work: Weeks of daily toil; long hours at the keyboard; chewed finger nails; bloodshot eyes; gallons of coffee. And finally, if you are lucky, your book emerges, all sparkly and beautiful, like a polished jewel!

One more thing – and this is extremely important advice for aspiring writers – you need to familiarise yourselves with the Track Changes function of Word, because you are gonna need that knowledge! I was lucky in that I had a proofreading course under my belt before I started, so Track Changes didn’t come as a complete surprise to me. This is a function that allows many people to edit and proofread a document without the changes they make to that document being lost – hence the changes are tracked, very much like sending a parcel – but Word also remembers the original document so nothing is lost (we can’t always say the same about the mail service!). Delete a paragraph, say, and it will be held in the margin in a sort of bubble. Only when the author accepts that deletion will that paragraph be completely removed from the document.

Well, this isn’t an article about Track Changes! Suffice it to say, as with many things, there are tutorials on You Tube if you really feel this is beyond you. Trust me, it isn’t. If I can manage to use this function, anyone with a modicum of computer skills will have no problem.

So, budding authors, prepare yourselves for the editing process; but don’t worry about it because it’s not all hard work and learning the craft, it can also be a lot of fun. 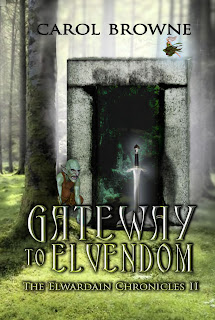 Godwin’s adventures in Elvendom left him a changed man, and now bereavement has darkened his world.

In another dimension, a new Elvendom is threatened by the ambitions of a monstrous enemy. Who—or what—is the Dark Lady of Bletchberm?

And what has become of Elgiva?

Reeling from the loss of their Elwardain, the elves ask Godwin for help.

Transported into a strange world of time travel and outlandish creatures, will he succeed in his quest against impossible odds, or will the Dark Lady destroy everything the Elwardain fought to preserve?

His heart thumping in his throat, Godwin took in all the details of the goblin’s appearance. The creature was probably four feet tall at most and was wearing a sleeveless leather tunic and short leggings over his skinny frame. His arms and legs were hard with thin bands of muscle; sinews moved like taut wires beneath the scant flesh. Godwin fancied that the goblin’s skin had a sickly, greenish tint, but in the firelight it was impossible to be sure.

The goblin moved in an awkward manner, not upright like a man or an elf, but slightly stooped and with bent knees, as though on the verge of pouncing. The dome of his head was as bald and smooth as a pebble, and his very long, pointed ears were attached on either side like those of a lynx. His large eyes glittered like wet malachite and between them a long, sharp nose protruded with all the aesthetic attributes of a small parsnip.

The goblin’s large eyes widened as they swivelled in Godwin’s direction, making his stomach curdle in fear and revulsion.

“Only two of you, then?” said the goblin with a smirk. “Not much of a challenge, is it?” He beckoned with his sword and others of his kind began to creep into the circle.

Godwin glanced around. There were six more of them, each carrying a sword of a curious design, the blade like a thin, metal spiral with a very sharp point. A visceral fear welled up inside him at the sight of these weapons, but he didn’t know why.