If like me you are introverted and social phobic, a book signing will be a very scary proposition. In my case I also live in a rural area without access to transport so just getting to a book signing event is a challenge. I was an eBook author for the first couple of years of my career too and so I didn’t have a book to sign anyway. This year, I did my first book signing courtesy of my supportive boss and his wife who not only allowed me to use part of their establishment (the pub where I work) but provided coffee and cakes for the people who attended. 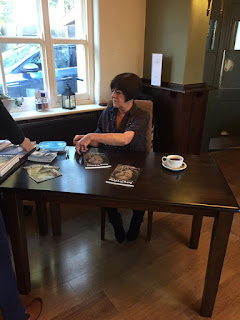 A writer’s life might appear to be very glamorous to outsiders, but it’s usually quite the opposite. I do a variety of jobs to keep from starving in a garret and they are mostly very menial: cleaning and washing up, for example. And when I attended this, my first real book signing, I didn’t roll up in a Porsche, I had to walk there dragging my paperbacks behind me in a shopping trolley. Even with wheels, that thing got damn heavy after the first fifteen minutes. I had nearly forty books in it—well, I had no idea how many to take.

Of course I was nervous but it turned out better than I expected. I sold twenty books and met some very interesting people. They all seemed so pleased to be there, and to be meeting me! Suddenly Cinderella had gone to the ball and she could forget about the washing up and the cleaning for a while. 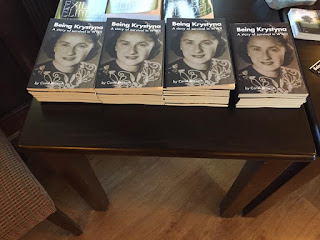 It was Holocaust Memorial Day in Britain on the 27th and so I was specifically promoting my book Being Krystyna—A Story of Survival in WWII. I discovered when I spoke to people at the event just how many of them have interesting stories to tell, especially about the war. One woman said her mother was born in a Japanese POW camp and the other female prisoners pooled their resources to provide food and clothing for the baby. I found out that my boss’s grandfather had been a prisoner of the Japanese too for three years. There are so many stories we shall never know about, stories of heroism and endurance.

Here are some more things I learned at the event that it is useful to share with other authors yet to experience a book signing:

1. Take book swag—postcards, bookmarks, etc.—because people love to get a freebie and they might pass them on to someone else. While I was promoting my non-fiction book, I handed out postcards that publicised my fantasy novel.

2. Have change ready for people who pay cash, as most will. You certainly don’t want to be taking cheques and if you’re like me you won’t have credit card capabilities! (My book was £4.99 and I had a stash of pennies in anticipation of all the five pound notes I was going to get, and did.)

3. Practise your signature before the event unless you’re that lucky person who has a naturally lovely and easily written moniker. Mine is a disappointment and that was a worry to me—who wants a spider scrawl on the first page of their pristine new book? And make sure you have a decent pen (and a replacement), one that’s not going to run out halfway through your signature or spit gouts of ink onto the paper. (I’m pleased to say, I was surprised and gratified at how my signature worked out on the day!) Don’t know what to write? Ask the person who the book is for (make sure to get the correct spelling) and simply put ‘To …., Best Wishes’ and then your signature.

4. Don’t worry that you’ll run out of books. You can always take people’s names and addresses. (I took a book of receipts in case people paid up front but as it turned out I didn’t need them.) If you are involved in advertising the event beforehand, you can suggest people buy your book first and bring it with them to be signed.

5. Have business cards to hand out. This was something I didn’t get round to. I didn’t have flyers or attractive posters either. And what that taught me was that next time I will be better prepared, but that it doesn’t spell disaster because most people who want to come to a book signing are coming to see you, the author, not all the bells and whistles you have brought with you. (People were so delighted to be given a mere postcard, you’d think I was handing out bank notes!).

6. Most importantly, stop worrying about everything having to be perfect. You have a talent to be proud of and you have achieved something most people haven’t. Enjoy that feeling of being recognised as a creative individual but at the same time remember that you are still just a human being and you can only do your best and no more. Don’t be afraid of doing a book signing either. Feel the fear and do it anyway.

If I can do it, anyone can. The important thing is, just have fun!

Here is a brief introduction to my book. Thank you for reading it. 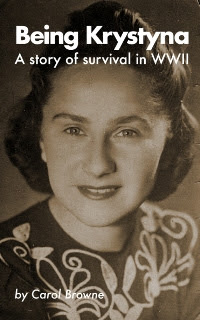 It’s 2012, the year of the London Olympics, and for young Polish immigrant Agnieszka, visiting fellow countrywoman Krystyna in a Peterborough care home is a simple act of kindness. However, the meeting proves to be the beginning of a life-changing experience. Krystyna’s stories about the past are not memories of the good old days but recollections of war-ravaged Europe: The Warsaw Ghetto, Pawiak Prison, Ravensbrück Concentration Camp, and the death march to freedom.

The losses and ordeals Krystyna suffered and what she had to do to survive, these are horrors Agnieszka must confront when she volunteers to be Krystyna’s biographer.

Will Agnieszka find a way to accomplish her task, and, in this harrowing story of survival, what is the message for us today?