This soup creates a warm and cozy meal on a late winter or early spring day. As it simmers the house fills with enticing aromas that will have your family clamoring for dinner! 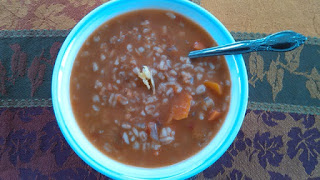 RINSE barley in a bowl of water and drain with a sieve while you look for little pebbles or debris.

BRING water to a boil in a small saucepan. Add rinsed barley to the saucepan and return to a boil. Reduce heat to a simmer. Cover and cook on low heat about 45 minutes or until liquid is absorbed. Set pan aside.

MIX paprika, garlic, salt, and pepper in a small bowl. Pat meat dry with a paper towel and rub spices on both sides. Move veggies to the sides of the Dutch oven or remove if more room is needed. Brown meat, stirring so all sides of the meat are browned.

POUR broth into pot along with bay leaf. Bring to a slow boil then reduce to a simmer. Cook until meat is tender, about 30 minutes.

STIR in barley and tomatoes. Cook another 15 minutes or until heated through.

While you enjoy your soup, why not listen to a good book? Starter Zone, the first book of my new YA/LitRPG series, The Revelation Chronicles, is now available on Audible!

When hydrologists inscribe the consciousness of a human mind onto a single drop of water, a Revelation sweeps the land. The wealthy race to upload their minds into self-contained virtual realities nicknamed Aquariums. In these containers people achieve every hope, dream, and desire. But governments wage war for control of the technology. Terrorist attacks cause massive destruction. The Aquariums fail. Inscribed human minds leech into the water cycle, wreaking havoc.

Street gangs rule the cities in the three years since the fall of civilization. Sixteen-year-old Cami and her younger sister Alby struggle to survive. Every drop of untreated water puts their lives in peril. Caught and imprisoned by soldiers who plan to sell them into slavery, Cami will do anything to escape and rescue her sister. Even if it means leaving the real word for a life in the realms, a new game-like reality created by the hydrologists for the chosen few.

But life in the realms isn’t as simple as it seems. Magic, combat, gear scores, quests, and dungeons are all puzzles to be solved as the sisters navigate their new surroundings. And they encounter more dangerous enemies than any they faced in the real world. Time to play the game.