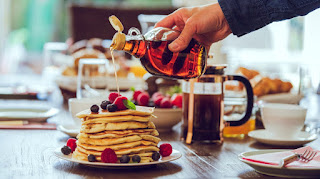 By the beginning of March, when nights are
still cold, daytime warmth intensifies, and icicles start to drip, the
residents of Fairy Falls know this can mean only one thing—it’s ‘sugar time’!
And as long as Mother Nature and the weather cooperate, the sap starts to run,
flowing through the maple trees to feed them. So when you see the smoke rising
from Gertie Ellis’ sugar shack well into the night, you just know that spring
is here.
Making maple syrup is a part of our North
American heritage. Maple trees grow in many parts of the world but maple syrup
is only made in certain parts of Canada and the United States. It was the
native people who first began making maple syrup as a source of sweetening;
they introduced it to the first settlers, who came to rely on it as a sweetener
as well, until refined sugar became available. The secret of making maple syrup
is to remove the water until the sugar content is about 66 percent. If one
wants maple sugar, more water must be removed.
We’ve come a long way from tapping trees with
hand-carved wooden spiles and boiling sap in large cast-iron pots suspended
from tripods. Nowadays, larger operations have stainless steel evaporators,
large holding tanks, and sap collection systems utilizing food-grade plastic
tubing attached to plastic spiles, drawing sap from each tree and carrying it
to holding tanks. If the slope of the land allows, gravity might be sufficient
to transport the sap to the evaporator, but other devices such as pumps or a
vertical system of tubing called a ‘sap ladder’, can supplement it. Wood is
still used to fuel fires; perhaps as much as one cord of wood is needed to
produce one gallon of syrup. It’s no wonder this golden nectar is so expensive!
Quality is the goal of the conscientious
producer. Not all maple syrup is the same. There are several grades of syrup—the
lightest being the syrup produced earliest in the season. As the season progresses,
the syrup becomes darker in color and the flavor becomes stronger. Choosing a
grade is a matter of personal preference.
Some would say, it is the quintessential
comfort food. It’s not just for pancakes—try pouring it over bran muffins, hot
from the oven, split and dripping with melting butter, or drizzled on ice
cream, rice pudding or oatmeal porridge. Once you start enjoying this delicacy,
the possibilities are endless. And, a bottle of maple syrup is a great gift—a delight
to the palate and a delicious taste of Fairy Falls. So if you get a chance,
stop by Gertie Ellis’ booth at the Fairy Falls’ Farmers Market and celebrate cottage
country, sweetly!
Here’s a taste of Blackflies and Blueberries, the second installment of Mysterious
Tales from Falls teen psychic mystery series…
The only witness left to testify against an unsolved
crime in Fairy Falls isn’t a person… 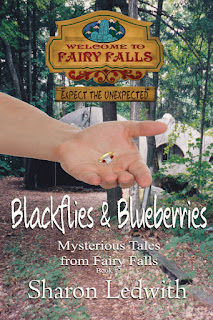 City born and bred, Hart Stewart possesses the gift of
psychometry—the psychic ability to discover facts about an event or person by
touching inanimate objects associated with them. Since his mother’s death,
seventeen-year-old Hart has endured homelessness, and has learned ways to keep
his illiteracy under wraps. He eventually learns of a great-aunt living in Fairy
Falls, and decides to leave the only life he’s ever known for an uncertain
future.
Diana MacGregor lives in Fairy Falls. Her mother was a victim of a
senseless murder. Only Diana’s unanswered questions and her grief keeps her
going, until Hart finds her mother’s lost ring and becomes a witness to her
murder.
Through Hart’s psychic power, Diana gains hope for justice. Their
investigation leads them into the corrupt world threatening Fairy Falls. To
secure the town’s future, Hart and Diana must join forces to uncover the
shocking truth, or they risk losing the true essence of Fairy Falls forever.
Mysterious Tales from Fairy Falls
Teen Psychic Mystery Series:
Lost and Found, Book One Buy
Links:
Blackflies and Blueberries, Book Two Buy Links: