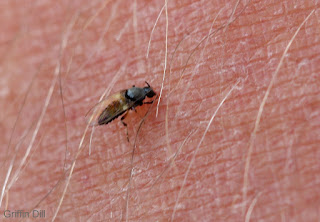 In Blackflies and Blueberries, the second installment of the Mysterious Tales from Fairy
Falls series, protagonist Hart Stewart meets his match when he’s introduced to
a swarm of blackflies, and has a hard time outrunning the vicious little
vampires. Like Hart, millions of campers, cabin-fevered tourists, and northern
residents abhor these pests. However, it’s easy to forget that blackflies may
in fact have positive attributes. Wait…what? That’s right. These little
blood-suckers play a huge role in the ecological community that we don’t
realize.
Now, it’s a long-held belief that
blackflies pollinate blueberry bushes. But scientists have a different opinion.
Seems like these demons with wings are more like nectar robbers. They’ll fly in
and stick their face into the nectaries of blueberries and other small plants,
but they are not very efficient at transferring pollen, mostly because of their
small body size. That’s where bees get the nod for their pollinating prowess.
Okay, so if blackflies aren’t good for blueberries, what are they good for?
The blackfly provides a direct link
between the aquatic and terrestrial world, serving as a significant food
source. Blackflies lay their eggs in fast-flowing water like streams where
brook trout and other fish are found. In the larval stage, they comprise an
important component of the food chain for fish, amphibians, birds, and ducks.
Dragonflies, damselflies, and birds are among their predators during their days
or weeks of flight. So if you were to take a major player like blackflies out
of the ecosystem, then it can have a cascading effect on others inhabiting that
ecosystem. 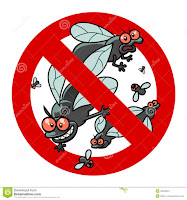 Many people consider blackflies to be the
guardians of the north. These are the brave ones who seek solace from the
masses during the glorious time of late May and early June. These are the
adventurers who crave solitude from crowded city streets and noise pollution.
They pack up their gear, and head into the far northern woods where swarms of
blackflies keep people away. I truly applaud those people. Let’s just hope that
they don’t forget to pack the bug spray.
Whether folklore or fact, I choose to give
blackflies the benefit of the doubt. The belief persists that more blackflies
mean more blueberries. And if you’re a blueberry lover like me, that’s a good
thing to believe in!
Here’s a little bite of my latest teen psychic mystery, Blackflies and Blueberries…
The only witness left to testify against an unsolved
crime in Fairy Falls isn’t a person… 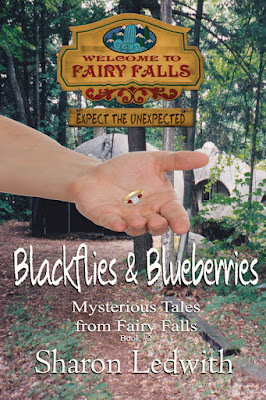 City born and bred, Hart Stewart possesses the
gift of psychometry—the psychic ability to discover facts about an event or
person by touching inanimate objects associated with them. Since his mother’s
death, seventeen-year-old Hart has endured homelessness, and has learned ways
to keep his illiteracy under wraps. He eventually learns of a great-aunt living
in Fairy Falls, and decides to leave the only life he’s ever known for an
uncertain future.
Diana MacGregor lives in Fairy Falls. Her mother
was a victim of a senseless murder. Only Diana’s unanswered questions and her
grief keeps her going, until Hart finds her mother’s lost ring and becomes a
witness to her murder.
Through Hart’s psychic power, Diana gains hope
for justice. Their investigation leads them into the corrupt world threatening
Fairy Falls. To secure the town’s future, Hart and Diana must join forces to
uncover the shocking truth, or they risk losing the true essence of Fairy Falls
forever.
As Hart
continued his journey, he became aware of a buzzing around his ears. He fanned
his hand around both ears in a circular motion, took another gulp of water, and
realized the buzzing was still there. Annoyed, Hart whipped his faded baseball
cap off, waved it around his head, and put it back on. There. That should
take care of the little bugger. But it didn’t. The buzzing grew louder.
Louder and more persistent. Something bit him on the back of his neck. Hart winced and clenched his teeth. It was as if someone had
plunged a sharp needle into him. He reached to slap his sweaty neck a few
times. When he pulled back his hand, Hart’s blue eyes bulged at the sight of
blood smeared across his palm. What the hell just bit me? A Fairy Falls
vampire?
The buzzing returned, and another creature flew into his ear.
Hart freaked. Maybe it’s trying to burrow into my brain? Suck out the
fluids? Leave me paralyzed on the road? His heart raced. He frantically dug
a finger into his ear to extract whatever had crawled in there. He winced,
hearing a sudden pop, like its body had exploded in his ear canal. Hart’s
shoulders tensed, as he pulled out his finger. It, too, was smudged with blood.
His blood. Sweat blistered across his temples and dripped down his face. What’s
going on? What are these strange creatures? And why are they attacking me?
More buzzing accompanied these thoughts. Biting his bottom
lip, Hart wiped the blood from his hand and finger across his jeans, and turned
to face the enemy. He dropped his jaw and water bottle at the same time. A flock,
no, a herd, no, a swarm of black, buzzing, blood-sucking whatever-they-were,
were inches from his face. The black cluster moved in for the kill. Hart
promptly closed his mouth, took a step back, then another, and another, but the
little beasties followed him every-which-way he went. He broke to the left;
they followed. He cut to the right; they pursued. He started to run backward;
they kept up with every stride taken. A root snagged Hart’s ankle and tripped
him. He rolled a short distance down a ravine before smacking into a group of
moss-covered boulders.
Disoriented, Hart shook his head, then looked up. That was a
mistake. The swarm of flying beasties were now hovering over him. His breathing
became shallow, his heartbeat erratic. His mouth went dry. This is it. I’ll
be devoured in a matter of minutes by a hoard of vicious, bloodletting demons
made of teeth and wings. Then Hart heard something else to his right. Not
buzzing or whining, but a noise that sounded like a nervous-whump, as if
someone was thrashing about in the bush. Slowly, Hart glanced to his right. His
skin tingled all over. Not more than a metre away, coiled in layers of brown
and black, hunched a lone rattlesnake, ready to strike.
In one breath, Hart rolled to his left, stood, and sprinted
into the forest. He ran like his life depended on it, cutting his own path,
while branches and saplings scraped his face and whipped his legs. The flying
black demons were hot on his trail but Hart soon lost them, and after about
fifteen minutes of constant running, looking back, running, and looking back,
he sensed it was safe enough to slow down. His lungs protested, his legs
screamed their silent pain as Hart, now sweating like a fat man in a sauna,
collapsed in a clearing and surrendered to his body’s wishes.
Feeling his legs cramp, Hart reached down to rub both his
calves briskly. Tired and hot, and now probably lost again, he knew he had to
find his way back to the road, wherever that was. Hart swore aloud, angry not
only with himself, but with the strange, savage creatures that lived up here.
He had thought he had some idea of what to expect. The trucker, whom he’d
hitched a ride up here with, had told him about the numerous golf courses that
dotted the area, about the million dollar cottages nestled amongst the trees,
and about the condominium style resorts that were being built around many of
the lakes’ shorelines. Hart banged a fist against the spongy forest floor. He
thought Fairy Falls would have been more civilized, more developed. But he was
wrong. Dead wrong.
Mysterious Tales from Fairy Falls
Teen Psychic Mystery Series:
Lost and Found, Book One Buy
Links:
Blackflies and Blueberries, Book Two Buy Links: